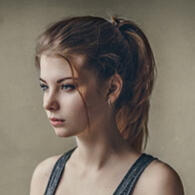 Backstory: The day of Finn's birth, a pregnant woman came to the Muggle hospital under the name Giovanna Bianco. Within hours, she had given birth to a girl, and then died. There was no way to save her, but before she died she named her daughter Finley. No one knew if the woman was a wizard or a Muggle, because apparently no one by the name of Giovanna Bianco existed. Finn spent the first three years of her life in an orphanage until after several 'inexplicable' events, some employees of the Ministry of Magic took her to a special orphanage for wizards and witches. A year later she was adopted by Ted and Andromeda Tonks. When she was seven years, she found a serpent in a tree and started talking to it. For some reason she felt she should keep the secret, and she did. When she found out what a parselmouth wizard was, and how dangerous and evil they normally were, she took the decision of never tell anyone about it